How would you describe the game in one sentence?

Hang Line is an extreme-physics climbing game where you swing up dangerous mountain peaks and rescue stranded survivors from avalanches and angry goats.


What's the game about?

You play as an extreme climber equipped with a grappling hook, who flings himself up death-defying peaks to rescue survivors from disasters like plane crashes or cave-ins.

Using the unique and intuitive one-tap control system, climb treacherous rock faces and navigate dangerous obstacles including angry mountain goats, falling boulders and shattering icicles Use your grapple to drag obstacles and pull away ice blockages in order to clear the path forward. Swing yourself to safety as the mountain literally collapses around you.

Play through a series of over 50 unique hand crafted levels, each offering its own unique challenges and surprises including avalanches and volcanoes. Earn awards and build up your rescue squad by searching for special items on the mountain and collecting unique character sets.

What's cool about the game?

It's simple to pick up, but extremely hard to master. The controls allow for a high degree of precision but the variability of the physics constantly surprises. Every element in the game interacts with every other element. Goats can kick cats, cats can pounce on explosives, explosives can explode stalactites, stalactites can crush goats... When this number of systems are all interacting as the player swings and bounces around on an elastic grapple line - you never know what to expect. And that's extremely entertaining.

Who is the developer?

A 17 year game design veteran, Ed Kay has been dreaming of making his own game since discovering the Doom level editor in 1996. But after a career of headshots, explosions and special moves spanning Cthulhu to Bulletstorm, it wasn't until having his dreams shattered from the Lucasarts apocalypse that he decided it was time to escape the constant loop of shipping and layoffs that plagues AAA console development.

So he stepped sideways into the indie scene and began learning all the stuff you don't have to do as a design lead, including tweaking polygons and sinking deep into the void of functions and IF statements. Eventually, in 2016 he made the decision to go solo, and quickly realised making a game alone is rather difficult. Ed wrote an article about this here:
Climbing an Impossible Mountain

Where did the idea come from?

The idea of creating a climbing game came from Ed's own feeble attempts at climbing large boulders on the beaches north of San Francisco. There's something very primal and exhilarating about the danger of hanging on to a piece of rock when once false move could put you in hospital. This seemed like an ideal premise for an action game on mobile. But after evaluating a ton of climbing games on the app store, it seemed almost impossible to think of a solid control system that was easy enough to pick up but also gave a high degree of control. The idea was almost abandoned until a simple solution appeared...

Screw it - just give the guy a grappling hook. And thus Hang Line was born.

The one-touch elastic grappling controls were easy to pick up but super hard to master, so the game learned towards very deliberate setups rather than a constant fast on-rails rush. Being able to take the game at your own pace instead of just reacting to the obstacles thrown at you was an important part of the design. Focusing mostly on hand crafted levels was intentional to create a very deliberate pace, provide some special moments and to give individual levels charm and personality. But later he did actually end up adding an infinite mode because... game dev.

Why free to play?

A core goal of this game was to reach as big an audience as possible, hence making it free so that anyone can download and play it.

"Every once in a while a trailer comes rolling across my desk here at TouchArcade and within a few seconds of watching it I instantly think 'Now THAT is exactly MY type of game!'"
Jared Nelson, TouchArcade

"If you're a fan of extreme sports, but aren't too keen on actually getting out and doing the stuff, you might want to keep an eye on Hang Line."
Emily Sowden, Pocket Gamer

"We are always delighted to present mobile games that come from scratch, usually a talented developer behind them, and implement ideas that we've never seen before."
MobilGamer

"There will be goats"
Angel Luis Sucasas, El Pais (article 2)

It's called DinoBoss. Hang Line will be it's first game. And hopefully not its last! 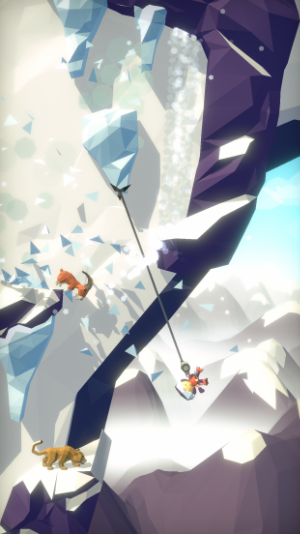